Learning to fly was the catalyst for Barbara Page's career as an artist. It gave her a point of view. After earning her pilot's license, she took up painting and received her MFA from Cornell university in 1975. Her watercolors, oils, and mixed media works have been exhibited widely and are included in numerous corporate collections.

Page has a strong interest in exploring different disciplines and recasting them in timebased visual sequences. The Museum of the Earth, in Ithaca, NY, was designed around her series of 544 bas-relief paintings depicting the history of life. Rock of Ages, Sands of Time, published by The University of Chicago Press (2001), contains color plates of the entire project. In 2012 she completed a commission for a geological timeline on a 140 foot long pedestrian bridge and a mural at the North Carolina Museum of Natural Sciences.

Her love affair with printed matter led to the Book Marks project, an ongoing pictorial survey of her reading history, which has been exhibited at The Center for Book Arts in New York City and at public libraries. She is a fellow of the Virginia Center for the Creative Arts and was artist-in-residence at the Golden Foundation. Her studio is in Trumansburg, NY. 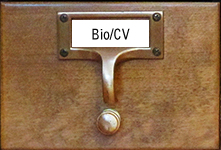